I had to look quite a long time to find a juggle book out there. With so many videos and tutorials out there, it is much easier to find them than a regular instruction book. I eventually did find four that I think are pretty good to help anyone get starting juggling.

The first juggle book I found is called, “Juggling for the Complete Klutz”, (30th Anniversary Edition), by John Cassidy and B.C. Rimbeaux (Aug 1, 2007), in paperback, on Amazon selling for $10.17 and it comes with a bagful of three beanballs.

This book on juggling will take you through step by step and even though the steps aren’t difficult they may take some time to master. First published over thirty years ago as a lesson plan for this fledgling student-teacher juggling was something he had learned to do in college and then perfected a bit like a river rafting guide during the summers.

To date, with more than 150 titles in print, the sales keep rolling in. They have sold over 3 million copies of the original “Klutz” book and, after thirty years, people are now buying them for their children because they are nostalgic about them due to the fact that they had one when they were young.

The illustrations and instruction are top-notch and they can guarantee that anyone can learn to juggle within fifteen minutes. There are testimonials to prove it, too.

The next book I found is called, “The Instant Juggling Book”, by Bob Woodburn, illustrated by Karen Liota, copyright 1990. Also found on Amazon they sell for $17.74 new.

This is a very entertaining book and makes juggling so easy it is as if you were juggling all of your life. Anyone can do it. Bob has taught well over 30,000 people to juggle with the help of this book and in seminars, he has put on for corporate executives and even lawyers. He has taught 100’s of people in a room to juggle all at once.

Juggling can help manage stress and let you get away from it all because of the concentration it takes to keep the balls in the air. Seems to me there should be some kind of metaphor there about juggling and life. Oh well, if you learn to juggle then you will probably figure that much out for yourself.

This book teaches you to juggle easily and effortlessly and also includes over three dozen tricks for the experienced juggler. So not only can you learn from this book you can expand your knowledge and experience a little as well. Kind of a two for one deal.

The ad for the book also says it comes with three juggling cubes, too. Some testimonials have said, though, that the balls are hard to come by and can be very disappointing to the young ones who were expecting them.

I did find two other juggle book authors who have instructional books for you to learn juggling as well. If you want to know more about them just go to Amazon and search for books on juggling. 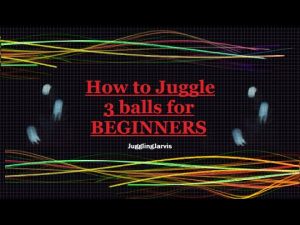